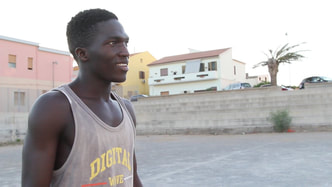 Musa’s home country, Gambia, is wrought with economic peril, but he says,” I am not an economic migrant. I am a dreamer”. Musa left home with three other 16 year old boys. Musa, being the smallest, found himself on the bottom of a stack of at least 5 other boys in the back seat of a small van. Windows covered with blankets and fishing nets stacked on top of the boys so no one could see in. They had to lie quietly and stay completely still so they wouldn’t be spotted by the local authorities. On the bottom of this pile, Musa could barely breath. And every bump in the   road was like being squished by an elephant. Then, the car came to a stop. Still blind, he heard the doors open to Arabic yelling and gun shots from an AK-47.  The boys on top of him were pulled off and thrown out into the desert. Even though no one was on top of him any more, he couldn’t move. He couldn’t feel his feet, or his arms. He still could barely breathe. The driver pointed his gun at Musa and screamed at him to get out of the car. But Musa couldn’t move. The man yelled again and Musa’s friends begged him to get out.  The man pressed his gun up to Musa’s head threading to fire. Musa closed his eyes and prayed. He thought of home and how he would have never left if he known he would die here in this desert. Musa opened his eyes just in time to see the butt of the gun smack him in the the side of his head.  Read more about meeting Musa here. 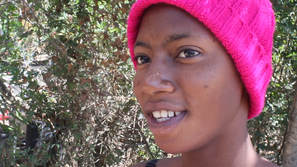 Adesuwa, born and raised in central Nigeria, loved her father. As she says, “When I did something wrong my father would not scold me or beat me, he would simply tell me ‘Adesuwa, I love you, but what you have done is wrong’. I am a lot like my father, I do not lose my temper. I do what I need to do.”


Adesuwa’s father died when she was 13 and she was placed into the care of her uncle and her uncle’s wives. It didn’t take long for her uncle to start sexually abusing her. She tried to get help from his wives, but they refused to protect her. She spent as much time as she could at her job selling supplies on the road, with a basket on her head, to avoid being home in that toxic environment. When she shared this with one of her regular customers, she was offered help. Her customer had a way to free her from her Uncle, but said it would cost a lot of money and be very risky. Adesuwa knew this might be her only chance. She went home and stole her uncle’s savings, packed a bag and ran as fast as she could. Together they got on a bus bound for Libya. From one hell to another. 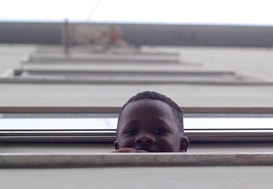 Ahmed was 3 when his mother took him from his home in Guinea, “All I thought about was my Ahmed,  I needed him to be safe”. They fled north taking the route they had heard about. They headed through Mali, into Algeria, then Libya. Ahmed doesn’t remember much but he says, “Libya is ugly. The people are very bad. For awhile we were in a prison. They did not even let us play.” He and his mother endured some of the worst humanity had to offer in the Libyan prisons before they were put onto a raft and sent across the sea.      In Italy, Ahmed sticks out in his very Italian neighborhood on the island of Sardinia, but if you ask him he wouldn’t see it that way.  He speaks Italian perfectly and even talks to his friends in the local Sardo language. He watches Italian cartoons and goes to the neighborhood kindergarten. His mother wants him to grow up Italian with all the privileges afforded to other Italian boys his age. Ahmed just wants to color, take care of his gold fish, and play with legos. He just wants to be a little boy.